The Brazilian Pedro Veniss came first in the challenging showjumping competition and winning round, on his 12-year-old Hanoverian mare For Felicila. It was a great honour, not just to accept the top award and prize of honour from GEZE shareholder Sandra Daniela Alber: congratulations also came from Nicole Hoffmeister-Kraut, Baden-Württemberg's Minister of Economic Affairs, herself a former national dressage champion multiple times over as wellholder of the German 'Goldenes Reiterabzeichen' gold riding badge.

The champion of the horse show 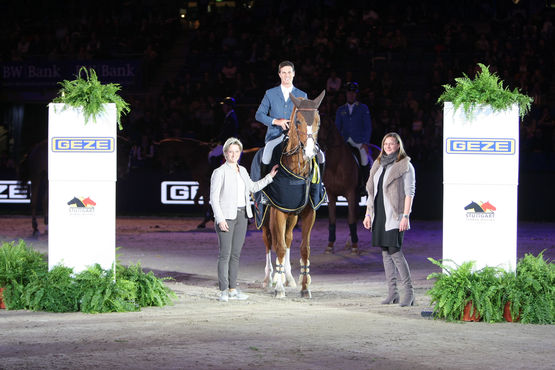 The Brazilian, who now lives in Europe, took the GEZE GmbH prize in the best time of 41.79 seconds with no penalty points. The challenging category 5 (CSI 5*) showjumping competition, which took place on 18 November 2017 at the Hanns-Martin-Schleyer-Halle in Stuttgart, attracted 47 riders and horses to the start. Twelve horses and riders made it to the final winning round.

The 34-year-old Pedro Veniss has proven himself at the world's biggest showjumping events. He finished fifth in team at the 2016 Olympic Games in Rio de Janeiro . At the end of 2016, he celebrated his biggest success yet as a showjumper by winning the Rolex Grand Slam at the international equestrian competition in Geneva (Switzerland).

Michael Jung secured second place, finishing the final course 27 hundredths of a second slower on his eight-year-old Westphalian mare fischerSolution, and completing the competition without penalties in 42.06 seconds. The 35-year-old world class rider has achieved every accolade in his sporting career: He ranks number one in the world as an eventing rider. He won two gold medals at the London Olympics in 2012. He also took Olympic Gold at the 2016 games in Rio de Janeiro. He has twice been World Champion, and six times European Champion. He took the Grand Slam in 2016, winning tournaments at Burghley, Badminton and Lexington.

In third place was the French rider Kevin Staut on Vendome d'Anchat HDC, his eight-year-old chestnut gelding. Horse and rider also completed the circuit without penalties in 42.36 seconds. The 37-year-old is an elite horse-jumper in France. This was not his first placing in Stuttgart. The former European champion won Grand Prize at the 2012 Stuttgart German Masters. In 2013, he took third place in the World Cup Final in Gothenburg. As part of the French team, Staut won a medal at the 2014 World Championships in Caen (Silver) and at the 2016 Olympic Games in London (Gold).

For many years, GEZE has been a sponsor of the challenging spring trial with a winning round, the ‘GEZE GmbH Prize‘, at the Stuttgart German Masters. This major tournament is a World Cup stage in terms of showjumping events: The biggest eventing test, the ‘Grand Prix of Stuttgart’, counts as a qualifier for the World Cup Final in jumping (Longines FEI World Cup Jumping), which will take place in April 2018 in Paris. 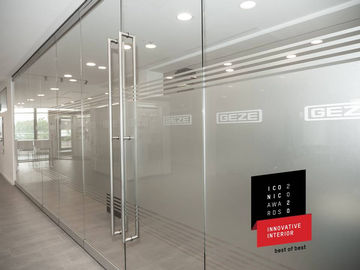