Increasing comfort in our working and living environments, operating buildings in an efficient, safe and sustainable manner: The GEZE Cockpit building automation system allows automated system components from the fields of door, window and safety technology from GEZE and other manufacturers to be networked, controlled centrally and monitored precisely. BACnet, the most widespread communication standard in building automation, enables interoperability. GEZE Cockpit can be used as an independent building automation system, or be integrated into a higher-ranking building management system. 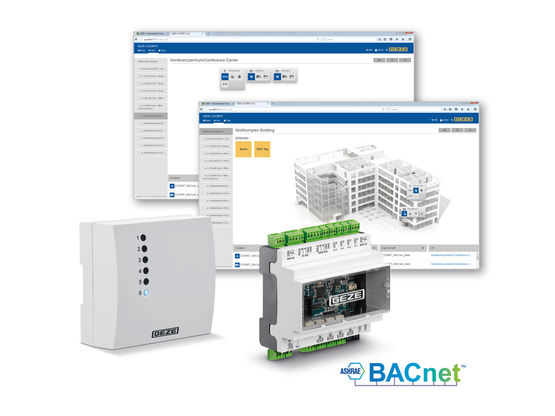 GEZE Cockpit is particularly suitable for functional buildings such as event venue, hospitals, laboratories, office buildings and department stores. This is because the demands in terms of operating and protecting automatic doors or windows for these buildings vary depending on the time of day. For example, if multifunctional doors are operated with different modes of operation (‘hold open’, ‘automatic’, ‘exit only’) during the day, and as secure escape and rescue route doors at night, networking with GEZE Cockpit networking allows for remote monitoring and operation of the doors, and changes to the mode of operation or time-controlled functions. Unwanted door conduct, alarms and disturbances can be localised quickly and easily, and countermeasures can be taken immediately.

With GEZE Cockpit, up to 62 GEZE products can be networked – swing and sliding door systems, emergency exit protection systems, windows and window groups, electric strikes or motor locks. The central hub of the GEZE network is the BACnet building controller, which can be installed together with the different GEZE software packages. The GEZE Cockpit BASIC configuration software is pre-installed for integrating the system into a higher-ranking building management system. As well as basic settings (e.g. network settings, user management, device and building configuration, data protection), the basic package ensures that all connected doors and windows can be confirmed and displayed at their exact locations within the building.

The GEZE Cockpit VISU and GEZE Cockpit VISU+ software packages allow GEZE Cockpit to be used as an independent building automation system. In addition, with the VISU package, the current situation and functionality of the doors or windows can be recorded on a graphic interface, at a glance, so that the conditions can be changed at the touch of a button. Creating so-called scenes enables several devices to be operated simultaneously – whether at the touch of a button or time-controlled.

The VISU+ package enables users to configure individual monitoring functions and alarms, about which they want to be informed by email: the ‘email service’ ensures that all doors and windows can be monitored without a visual inspection. A great advantage for facility managers and security personnel – they can be informed of situation changes, alarms or errors from any area, and react immediately; for instance, if the emergency push button of an escape door is activated in a department store, a door is opened by an unauthorised person in a care home at night, or a door in a public building is not locked after it has closed for the evening.

The software applications on GEZE Cockpit are browser-based, so that information can be accessed with any device with an IP – be it a PC, tablet or smartphone. Data exchange between GEZE Cockpit and the integrated doors and windows is via the IO 420 BACnet interface module.